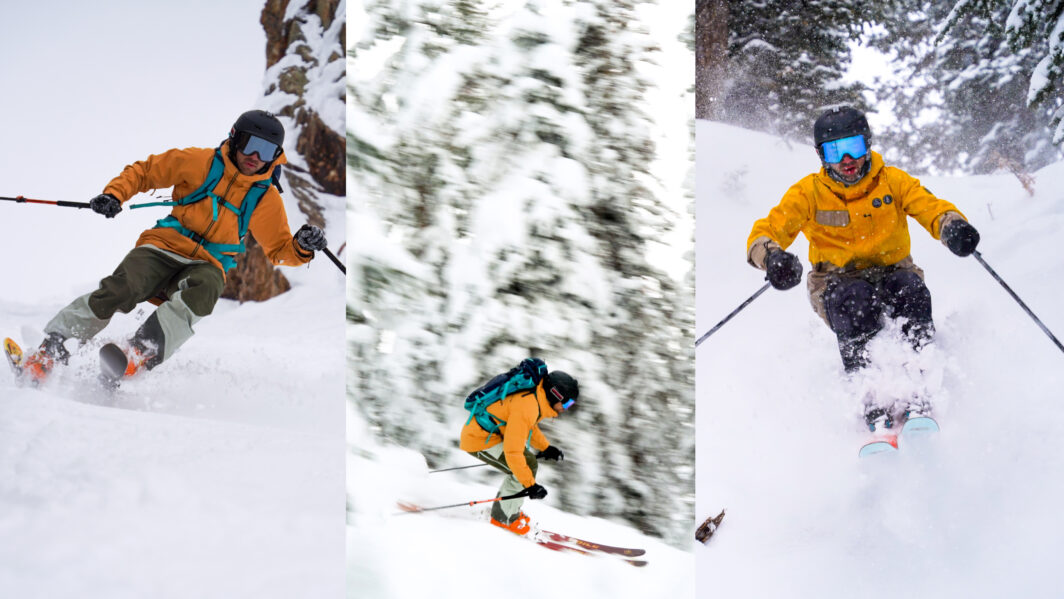 The Supercharger, V6, and Manti. Three different skis with more similarities than differences. Each serves as a piece of the foundation upon which the rest of the Voile lineup is built. We wouldn’t hesitate to take any of these skis out into the backcountry, in powder, or even in the resort. That said, there are a few notable characteristics in each ski that may cater to a certain style of skier or terrain. We break all of this down in the following video as well as further into the blog. So grab your popcorn (or reading glasses) and sit back as we find out which ski is right for you.

There are many, MANY design features and characteristics that go into a ski and affect the way it feels. So many in fact, that this topic almost warrants its entirely own blog/article/video. But lucky for you, a lot of the structural characteristics of Voile skis remain the same from ski to ski. All of our non-hyper skis feature the same Aspen wood core and Single Carbon layup as pictured here.

They all are designed to be backcountry-oriented, lightweight, directional, and float through powder like a dream. So, to help easily decipher the difference between these three skis, we’re going to focus on the following defining characteristics (You’ll notice that we aren’t going particularly deep on the Camber and that’s because we’ve already done it here).

This is the width of the middle portion of the ski. This is the dimension that many people use to determine what conditions or terrain a ski is best suited for. Typically, the wider you go, the more powder or “freeride” oriented your ski is. That said, pairing width with a type of snow or terrain is subjective and truly comes down to personal preference.

The contact point of a ski is what defines its turn radius and how long (or short) the ski feels. This is the point at which the edge of your ski is making contact with the snow. Ultimately, the true amount of the ski that’s actually touching the snow when turning.

Now that we’ve set the stage, let’s dive in on what the type of riding the Supercharger, V6, and Manti thrive in and which ski is the right choice for you.

Well folx, it’s in the name. This ski charges. It’s also the fattest of the three skis we are looking at coming in with a 99-108mm waist (dependent on length). The Supercharger (and similarly, the narrower Ultravector) features a generous amount of tip and tail taper that make turning in powder feel intuitive. This ski features a more subdued rocker than the V-Series (V6 / V8) which pushes the contact points further apart and makes it feel stiffer than our other offerings. The Supercharger has a lot of rebound coming out of turns and caters to an energetic skier who likes to drive a ski edge to edge.

You can really load up the tail on this ski but it has enough forgiveness to it that you won’t get obliterated if you end up in the back seat. This is the right ski for you if you find yourself skiing variable terrain with a fast and aggressive style. The Supercharger is also our most Freeride-oriented ski, so if you’re looking for a big-mountain stomp pad this is the direction we would point you in.

The V-series has been a staple in the Voile ski lineup for 8 years now and the V6 remains our favorite daily powder ski. Today we are focusing on the V6 but most of this information also applies to its fatter sibling the V8 (a true powder hog). Featuring a 96-102mm waist (dependent on length), the V6 is best served as an “everyday powder ski.” It can hang in the deepest snow, but very confidently handle days where you might see a variety of conditions.

The Hybrid Rocker in the tip and tail gives this ski the shortest distance between contact points. This is what creates its easy turn initiation and “surfy” feel. Pair the Hybrid Rocker with a round tip and tail taper, and you have a snappy feeling ski. These features allow you to easily pivot the V6 when riding in tight trees or maximizing your number of wiggles on a wide-open slope. If we could define this ski with one phrase it would be “It’s easy to ski.” If you’re looking for a quick-turning ski that’s designed to surf, this is the right ski for you.

The Manti is offered in a 100-105mm waist width (dependent on length). It has a reliable tail but it won’t punish you if you end up in the backseat while skiing dicey conditions. The Manti rewards those who like to load up the tails and ski edge to edge, but it can really cut the rug when making quick turns in tight places. We wouldn’t be afraid to ski the Manti aggressively in variable terrain or even bring it into trees and chutes where maneuverability is essential. If you like to do a bit of everything but want something that’s reliable when the conditions get tricky, look no further.

Which Ski is Right For You?

Yes, that was a whole lot of ski jargon to throw at you in such a short amount of time. And truth be told, a truly deep dive would have potentially mind-numbing effects. But, the goal here is to tell you a little bit about how these skis feel on snow and why they feel that way. While just about anyone could get along with any of these skis, we hope that you can now make an informed decision when choosing your next backcountry daily driver.

If you’re truly interested in going down the rabbit hole of ski characteristics and terminology, we’d highly recommend you check out Blister Review’s articles “Rocker 101: A Brief History of Rock + A Glossary of Terms”, or “Ski Terms (What We Talk About When We Talk About Skiing”. Stay safe out there!