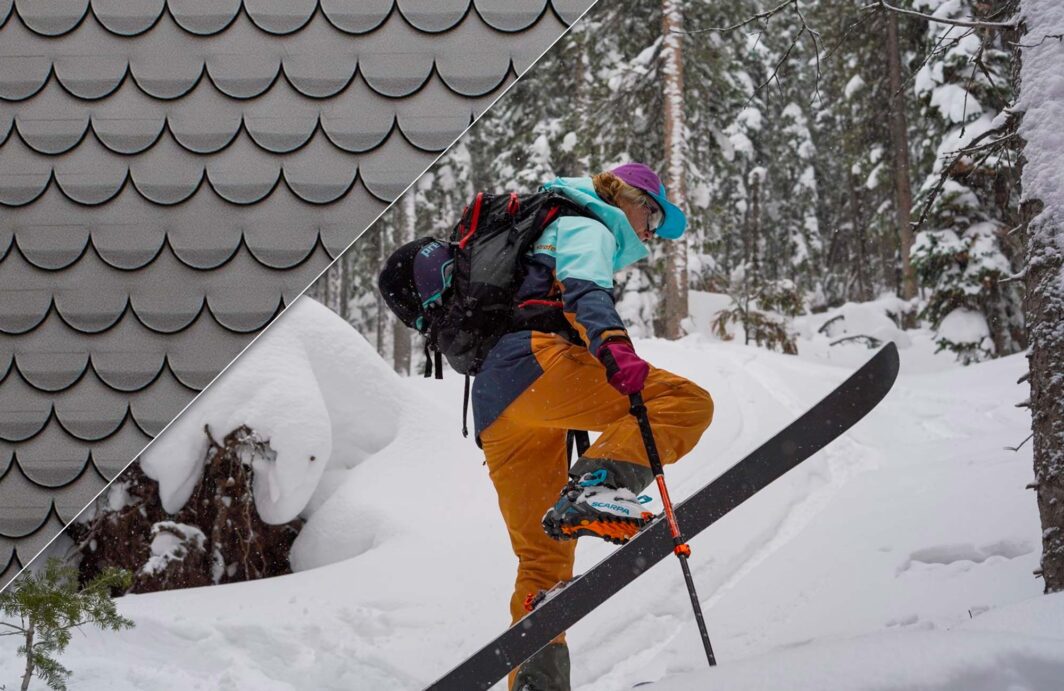 You’ve found your way into one of the nichiest-niches in all of skiing: full-sized backcountry skis and snowboards with Traction Pattern Base. Perhaps, you’ve been considering scale-based skis for a while now. Maybe you’re just learning about it for the first time. In this post, we plan to run you through everything you need to know about our Traction Pattern Bases.

(“Traction Pattern Base” is our way of saying Scale-Based… you can use these terms synonymously.)

Imagine for a moment that there was a blend of your favorite powder ski and those old Nordic skis in the corner of your garage. That’s exactly what Voile BC skis and boards are. A solid downhill ride that you can effortlessly glide and climb in. With that in mind, watch the following video or read further into the blog to learn everything you need to know about Voile BC skis and boards.

Scale-Based Skis and Boards On Snow

If this is your first time considering a scaled downhill ski, I’m sure you have plenty of questions. In an effort to help answer as many as we can, we’re going to dive in on the pros and cons of Traction Pattern Bases.

This is where most of the difference between our scaled and non-scaled offerings will be noticed. The main draw of scale-based skis and boards is that to an extent, you don’t need climbing skins. On all of your flat, low-angle, or rolling terrain, you can get maximum glide and major weight savings. This should come with a notice that our Traction Pattern Bases do not serve as a substitute for climbing skins. When going up steep terrain, or iced over skin tracks, you won’t get nearly the same grip that climbing skins offer. For this reason, we recommend keeping skins in your bag when using BC skis. That is unless you’re certain the terrain you’ll be in won’t require them.

It should also be noted that snow conditions greatly impact the steepness you’re able to get away with while skinning. The most ideal skinning conditions for BC skis would be an inch of fresh snow atop an established skin track. Anything icy will cause slippage unless it’s incredibly low-angle or flat. A blanket of fresh powder is easier to grip into than ice, but you’ll find that the skinning will be easiest on lap #2 once the skin track has been established.

We’ve found that you can climb to a slope angle of ~21 degrees without climbing skins on a groomed slope.

The minimal interaction with climbing skins when using BC skis means your transitions will now be lightning fast. For days when you’re touring alone, this can mean more laps and an overall more enjoyable experience. For days when you’re with a group of friends that use non-scaled skis, this benefit can be negligible. Just because your transition is lightning fast, doesn’t mean everyone else’s will also instantly speed up. You may find yourself standing there waiting while everyone fiddles with their skins if you often ride with non-scaled folx.

Here’s where you’ll experience the least amount of difference between scaled and non-scaled skis and boards. And that’s truly the beauty of these skis! Added efficiency and almost uncompromised downhill performance. This is with the exception of running out flat terrain. While this factor is heavily dependent on snow conditions, we’ve found that skis with Traction Pattern Bases are slower on the flats compared to non-scaled counterparts. We’ve found that Scale-based skis maintain 87% of the downhill speed of their non-scaled counterparts on groomed trail conditions. That said, when the snow has immense moisture in it (think late afternoons in the Spring), we’ve found that the scale-based skis are faster on the flats than non-scaled.

Also, those who like to ride switch (looking at you snowboarders) will be slowed down significantly due to riding “against the grain” of the scales. Other than that, you can expect the same downhill performance you’ve come to know from non-scaled Voile offerings.

So What Are These Skis Made for?

Great question (self high-five). There are a lot of great applications for these skis and different ways they can fit in your quiver. For example, this might be one person’s dedicated backcountry ski, another’s fitness ski, or even a dedicated “long approach” ski. There’s no right or wrong way to use these but there are a few applications that we see more than others…

Do you often find yourself touring through miles and miles of rolling terrain to access specific lines or zones? BC skis help save energy by taking climbing skins out of the equation on mellow angle approaches. This means more glide and less weight on your feet.

This is a popular BC ski application for those in the Midwest or out East. If you want a ski for the purpose of exploration and low-angle wiggles, then there’s no better alternative. Your transition time will be dramatically decreased without the need for climbing skins.

Find yourself wanting the sporty feel of XC skis on groomed trails but want to make a few “real” turns down that little meadow over there? Look no further. While it isn’t a XC ski, these give you a solid amount of glide with an uncompromised downhill experience.

For some, BC skis make a lot of sense as a standard backcountry go-to. Since they have the same downhill characteristics as their non-scaled siblings, there’s really only uphill efficiency to be gained.

Tips and Tricks for Scale-Based Skis and Boards

At this point, you should have a pretty good idea of the similarities and differences of scaled vs. non-scaled skis and boards. With being a unique product, there are some unique things that you can do that will improve your overall experience.

Waxing: When waxing your BC skis and boards you should avoid using hot wax on the scales. This will lead to hours of picking out the hardened wax from between each individual scale. Take it from me…not a good time. Instead, you can use rub-on wax to add more glide to your scales and hot wax on the tips and tails.

Skinning Technique: You’ll notice when you first begin walking in your BC skis and boards that it feels “slippery”. This feeling could take a little bit of getting used to and require a slightly different skinning technique. We’ve found that it helps to be conscious of where you put your weight when going uphill. Putting most of your weight into your heel will give you the most grip while traveling uphill.

Kick Turns: When performing kick turns on an existing skin track, we’ve found that it helps to take a slightly different approach. We recommend you go beyond where prior kick turns had taken place and get into some fresh snow. You should then cut back into the skin track horizontally. This helps to eliminate slippage on the corners.

Terrain Navigation: This is possibly the most important factor to have at the forefront of your mind when using BC skis and snowboards. Skinning sans-climbing skins require a more mellow approach overall which may be quite the change for those in the US who prefer to throw all of their risers up and “blast” up terrain. BC skis and boards cater to taking the path of least resistance and opting for more kick turns and traverses. Ultimately, they require more spatial awareness when navigating terrain, but you should get the hang of it in no time.

That’s a-ok. Making the commitment to purchase a new set of skis or a new snowboard takes time. Especially, when they’re as unique as our BC line. That said, you can find some information online about our BC skis such as this review from WildSnow, or this blog post from V-Team Ambassador Nate Rowland. Also, it goes without saying, the best way to see if scaled-skis are right for you is to try them out. If you’re in or near Salt Lake City, you can drop by our shop and demo a pair or two. Stay safe and have fun out there folx.