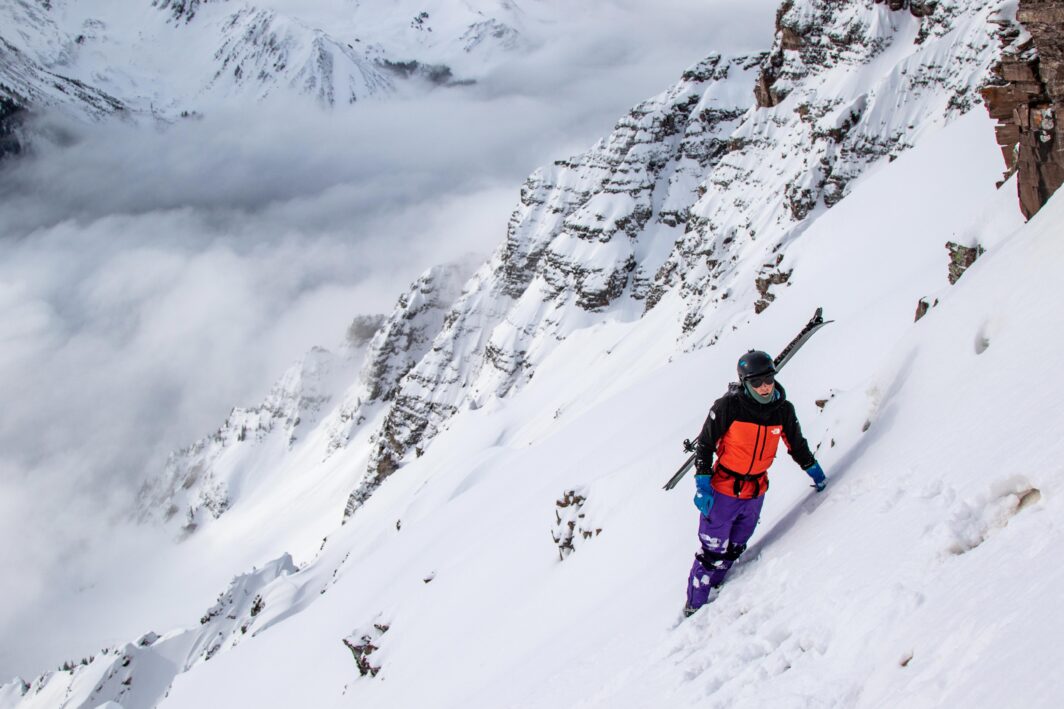 All Photos Courtesy of Aidan Goldie-Ahumada

What is it about steep skiing that has enthralled so many? As the Chilean poet, Pablo Neruda said, “Someday, somewhere – anywhere, unfailingly, you’ll find yourself, and that, and only that, can be the happiest or bitterest hour of your life.” Both the happiest and bitterest moments in my life, the ones where I have truly found myself, have been on skis traveling in the most remote and inhospitable environments. From the highest highs riddled with growing anticipation on the summits of longtime objectives to confronting tragedy at the foot of a remote glacier.

I first climbed Mount Tahoma in the summer following my first year of college. With a growing interest in the summits beyond my backyard Colorado Rockies, a mentor told me that climbing Mount Tahoma could be an important stepping stone toward the world’s big ranges. Tahoma is one of a few peaks in the lower 48 that combines a mountain of scale, heavily glaciated terrain, and challenging route finding. This prominent stratovolcano attracts visitors from around the world and has inspired generations of mountaineers. With Mount Tahoma on my mind, I took the first opportunity at the end of the spring semester to drive across the west and join some friends on the Nisqually Glacier to climb Tahoma via the Kautz Glacier route.

Mount Tahoma first becomes visible on the horizon many hundreds of miles from the trailhead. Anticipation builds as the small mound in the distance slowly turns into a prominent, complex, and imposing mountain. After a quick parking lot gear explosion, we collected our permits, donned our mountaineering boots, and started our long approach to Camp Hazard at the base of the Kautz Headwall. To get to Camp Hazard, one first has to cross the Nisqually Glacier. Depending on conditions, this can be a good introduction to roped glacier travel. An opportunity to get our systems dialed in before making the transition to the Kautz Glacier and navigating the maze of snowfields, icefalls, seracs, and mafic ridges.

Traveling from base to summit is around 9,000 feet of elevation gain. The scale of the mountain is complicated by navigating crevasses, dodging persistent rock and icefall, and anticipating extremes in weather. Our group got an alpine start and started working around the opening glaciers under the faint glow of headlamps. Dawn breaks on the east side of the mountain and suddenly casts a large shadow towards Seattle and the Pacific. Another reminder of the scale and prominence of this massif.

Soon after the first rays of light hit our shivering bodies, the terrain begins to flatten as we gain the summit block of the mountain. With the Columbia Crest in sight, we trudge through the summit gusts and stand atop the highest Pacific Northwest volcano. After a successful summit, we take refuge in a volcanic fumarole for a snack before descending the same route. We set up a series of anchors to make our way down the steep Kautz Headwall. With the snow frozen from the night, we donated a few pickets to the mountain to rappel the steepest sections of the route.

Nearing the end of my rope on my last rappel, I hear the distinct sound of scraping skis above me. I look up to see two skiers making turns down the Kautz Headwall. They carve perfect turns in the sun-softened snow and quickly pass our group.  I watch, stunned, as they go up and over Camp Hazard and effortlessly ski down to the Nisqually Glacier below. They make their descent in a matter of minutes. I think of the skiers as we do the same descent in our mountaineering boots and a handful of hours.

At this point, the idea of steep skiing was pretty abstract to me. Existing only on the impossibly steep spines of Alaskan peaks I had seen in Warren Miller films. Steep skiing was something reserved for the pros and a helicopter ride. This trip to Mount Tahoma propelled me in a direction I was not initially anticipating. I was expecting to build skills to better climb large peaks, but instead, something new was instilled in me. A desire to learn how to more efficiently travel in complex terrain through the lens of ski-mountaineering.

I traded my mountaineering boots for touring boots and, years later, found myself standing on the amphitheater saddle looking towards the summit block of Pyramid Peak. Pyramid Peak is a landmark of the Elk Mountains outside of Aspen, Colorado. The iconic profile of the impossibly steep face can be seen from the summits of a few Aspen ski resorts. This line was first skied by Chris Landry in 1978 and is considered a significant inflection point in the sport of steep skiing. The face seems so imposing, so consequential, and so steep that nobody repeated the Landry Line until it was skied again in 2006 by Chris Davenport and Neal Beidleman. These descents of the Landry Line, along with other steep-skiing test pieces like the Newton-Clark headwall on Mount Hood and the Ford-Stettner Couloir on The Grand Teton, demonstrated what is possible on skis.

Gaining the winter summit of the Pyramid Peak requires navigating deeply faceted snow as it sloughs off the red bands of crumbing sedimentary rock that make up this part of the Elk Mountains. The summit block of Pyramid Peak is steep and impermanent, with thousand-foot falls on either side. Getting to the top is a practice of focus and finesse. Successfully skiing this peak is not only a test of confidence on steep terrain but also the ability to track the season’s snowpack and catch a small window of ideal conditions.

Facing Fears And The Fall Line

As we gained the last few feet to reach the summit of Pyramid Peak, the clouds finally pushed over the divide and enveloped us on the summit. All of a sudden we were on a small summit inside of a milk jug. We could only see the first few steep turns off the summit and beyond that nothing. My partner Slator and I put on our warmest layers and decided to wait for a small window of visibility. It finally came. The clouds didn’t part and shower us in early-morning light as we hoped, but they became less dense. Instead of seeing a few feet down the slope, we could see a hundred feet down the imposing Landry Line. Taking what we could get, Slator and I scraped our skis on the steep 60-degree start of the line.

Our first instinct when encountering fear is to back away. But steep skiing is to ignore instinct and lean into what is scary. To keep our bodies pointed down the fall line. It is this that maintains the delicate balance, keeps the edges of our skis biting the hardpack, and keeps us secured above 1000-foot cliffs below. Fear dwindles as we carefully and more confidently link jump turns through rock bands and variable snow. That initial steepness of the Landry Line eventually lessens to an even-keeled 50 degrees as we ski to the bottom.

Why We Go Steep Skiing

So what is it exactly about steep skiing? It’s the razor-sharp attention necessitated by the millimeters of metal holding my skis onto the firm snow below. It’s the moments of flying where you fully detach from the steep slope, perfectly raising the tails of your skis in unison, and execute the perfect jump turn. For me, it is in those fleeting moments of supreme focus that I feel fully engaged. When the rest of the world melts away, only concerned with linking one turn into another. It’s in these moments, that I find myself.

Whether it is on the steep slopes of central Colorado to following winter in Chilean Patagonia, steep skiing has been an important part of my life thus far. Steep skiing is chasing something magically ethereal. The unique feeling of your body rhythmically in sync with the pull of gravity. Chasing fleeting sensations of weightlessness. Skis… not a commodity, but a conduit to experience the earth. 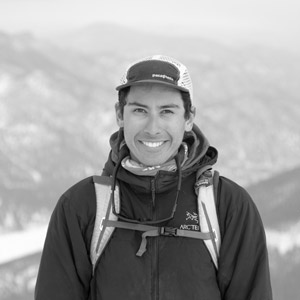 Location: Traditional lands of the Núu-agha-tʉvʉ-pʉ̱ (Ute) tribe in the Rocky Mountains

Born in Chile, Aidan (he/him/his) spent much of his childhood living in South America before immigrating to the United States where he lives today. In the latter half of his childhood, Aidan called the mountains of Colorado home and grew exploring his rugged backyard peaks through the lens of backcountry skiing and skyrunning. He is now settled in the Roaring Fork Valley where he works as a Physics teacher to best support his community through equitable and intentional education practices.

Aidan teaches, climbs, and backcountry skis on the traditional lands of the Núu-agha-tʉvʉ-pʉ̱ (Ute) tribe in the Rocky Mountains. When not teaching, Aidan feels most at home in cold winter environments with something sharp strapped to his feet. Whether it is a pair of skis or crampons, Aidan is on a continual search for aesthetic climbs and descents in our Rocky Mountains, continually shaping his mountain ethic to instill pedagogical values of environmental justice, equity, and cultural relevance.