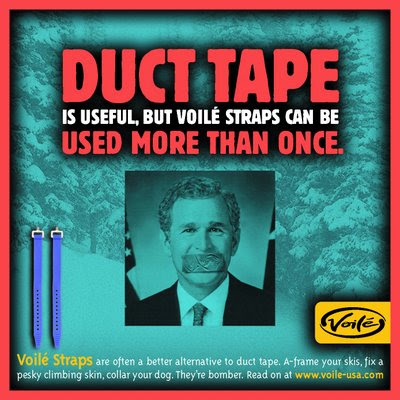 As the Bush era draws to a close and we all chose our next president today, we look back at the ad campaign we ran in the Fall of 2002. The “Duct Tape” ad was the one that stood out among all the ads in the campaign. It sparked a remarkable amount of debate with some positive editorial commentary as well as some ruthless hate mail.
It should be noted that Voile was only trying to make light of Mr. Bush’s public speaking abilities. We certainly sold a lot more Voile Straps after running that ad. Thankfully, we all live in a society that you can freely express your views no matter if from the left or the right. We want to thank everyone for standing in long voting lines today. We will all be moving forward in a new positive direction no matter the result of this election. Godspeed.