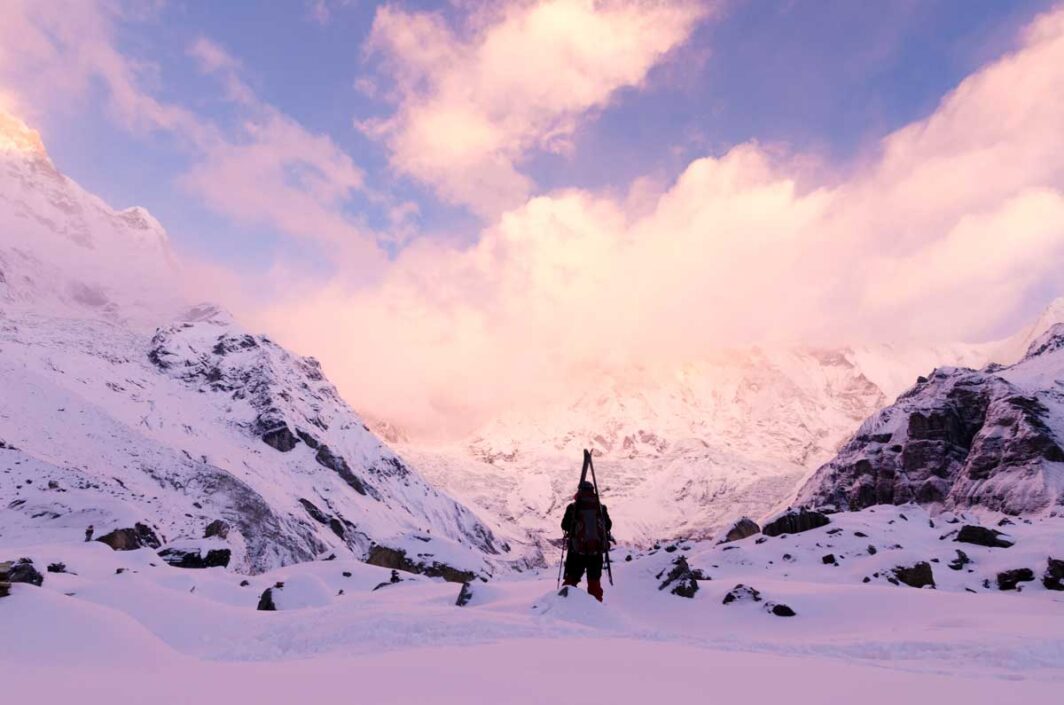 No purchase necessary to win.

1. ELIGIBILITY: Each Brooke Jackson Scholarship for Women in the Backcountry (“Promotion”) is offered and open only to legal residents of such jurisdiction(s) as stated in the advertisement for such Promotion (“Promotion Advertisement”) who are age 21 or older at time of entry. Void in all other states and where prohibited. Prize must be redeemed within 1 year of winning date. Current Voile Mfg. employees, partners, and ambassadors are restricted from entering this contest.

3. HOW TO ENTER: Follow any entry instructions as set forth on the Brooke Jackson Scholarship for Women in the Backcountry Promotion Advertisement. Submit an essay with a minimum of three photos of the applicant pictured somewhere in the photo. All entries must be submitted through the Google Forms link provide in the Promotion advertisement. Entries that are submitted via email, social media messengers or any other formats will be considered incomplete and not considered. All entries become the property of Sponsor and posted to their website for public visibility. Promotion Entities assume no responsibility for lost, late, incomplete, inaccurate, stolen, misdirected, postage due or illegible entries; nor for any computer, telephone, cable network, electronic or Internet hardware or software malfunctions, failures, connections, or availability, or garbled, corrupt, or jumbled transmissions; nor service provider, Internet, Web site, user net accessibility or availability, traffic congestion, or any technical error; nor for unauthorized human intervention, human error, or the incorrect or inaccurate capture of entry or other information; nor for the failure to capture any such information.

4. CONDITIONS OF ENTRY: Once submitted, entry cannot be modified, deleted or canceled. Entries may not infringe or violate the rights of any third party. Sponsor reserves the right, at its sole and absolute discretion, to refuse, disqualify, or withdraw entries and/or Entrants at any time during the Promotion. Entries become the property of Sponsor and will not be returned. Use of any automated system, software applications that enable users to create multiple posts or accounts and/or temporary accounts to participate in this Promotion or to redeem prizes is prohibited and may result in disqualification from this Promotion and any current or future promotions offered by the Sponsor. In the event of a dispute as to any entry, the “Authorized Account Holder” of the phone number or email address associated with the account at time of entry will be deemed to be the entrant. The Authorized Account Holder is the natural person assigned a phone number or email address by the wireless telecommunications carrier, phone service provider, Internet access provider, online service provider or other organization responsible for assigning phone numbers or email addresses. Each potential winner may be required to show proof of being an Authorized Account Holder.

5. SELECTION OF WINNERS: Sponsor will conduct judging on or about the date(s) indicated on the Brooke Jackson Scholarship for Women in the Backcountry Promotion Advertisement, from all eligible entries received to such date. Entries will be judged by Sponsor: ambassador Brooke Jackson and female Voile Mfg employees. Other employees or V-Team ambassadors may be required to help judge if the volume of submissions is overwhelming. Finalists essays to be selected based on a combination of narrative quality, compelling intentions, clarity of stoke, empathy and approachability of story. A winner will be selected from among these finalists using popular vote from the judging panel. The too will determine the runner up winner. Only one entry per participant will be considered. Sponsor will select the number of winners indicated on the Promotion Advertisement. Odds of winning depend on the number of eligible entries received and the number of prizes to be given away. Potential winner(s) will be contacted via the email address provided at the time of entry, or such other method as may be practical in Sponsor’s discretion, within 5 to 10 business days after the selection of winners. You are not a winner until Sponsor has verified your eligibility and compliance with these Official Rules. Potential prize winners may be required to complete, have notarized and return an Affidavit of Eligibility, Liability and, where legal, Publicity Release within seven (7) calendar days of notification or attempted notification. Sponsor will make one attempt to notify each potential winner, who will have twenty-four (24) hours to respond. If (a) Sponsor is unable to contact a potential winner; (b) a potential winner fails to respond to a notification attempt within 24 hours; (c) a potential winner fails to timely return or properly complete the above-described release documents; (d) a prize notification or any prize is returned as non-deliverable; or (e) a potential winner is not eligible or does not comply with these Official Rules, prize forfeiture will result and an alternate potential winner may be selected. If a winner for any prize cannot be confirmed within 30 days of the drawing date, then the prize will not be awarded.

7. GENERAL: By participating in the Brooke Jackson Scholarship for Women in the Backcountry, participants agree to abide by and be bound to these Official Rules and the decisions of Sponsor, which are final and binding in all respects. Failure to timely return or properly complete release documents (as described herein), or if a prize notification or any prize is returned as non-deliverable, or if potential winner is not eligible or does not comply with these Official Rules prize forfeiture will result and an alternate potential winner may be selected. BY PARTICIPATING, PARTICIPANTS AGREE TO RELEASE, DISCHARGE AND HOLD HARMLESS THE SPONSOR, PROMOTION ENTITIES, ANY RETAILER AT WHICH THE PROMOTION IS ADVERTISED OR AT WHICH PARTICIPANTS MAY ENTER, AND THEIR RESPECTIVE OFFICERS, DIRECTORS, EMPLOYEES, INDEPENDENT CONTRACTORS, REPRESENTATIVES AND AGENTS FROM AND AGAINST ANY AND ALL ALLEGED AND/OR ACTUAL CLAIMS, ACTIONS, DEMANDS, LOSSES, SETTLEMENTS (WHETHER OR NOT LITIGATION IS COMMENCED), LIABILITIES AND DAMAGES OF ANY KIND WHATSOEVER EXISTING NOW OR ARISING IN THE FUTURE (INCLUDING, WITHOUT LIMITATION, BODILY INJURY, PERSONAL INJURY, DEATH, DISABILITY AND PROPERTY DAMAGE), COSTS AND EXPENSES (INCLUDING, WITHOUT LIMITATION, REASONABLE ATTORNEYS’ FEES, COURT COSTS, SETTLEMENT AND DISBURSEMENTS) DIRECTLY OR INDIRECTLY ARISING NOW OR IN THE FUTURE IN WHOLE OR IN PART OUT OF ACCEPTANCE, POSSESSION, USE OR MISUSE OF A PRIZE, PARTICIPATION IN ANY CONTEST/PRIZE RELATED ACTIVITY, ACCESS TO WEB SITE, AND/OR PARTICIPATION IN THIS PROMOTION. By entering and/or accepting a prize, participants and/or winners hereby consent, where lawful, to the use by Sponsor (and its authorized third parties) of their name, hometown, and/or biographical information in any and all media now known or hereafter developed worldwide, and on the Internet and World Wide Web, without additional compensation, and without the right of review, notification or approval.

8. LIMITATIONS OF LIABILITY: Brooke Jackson Scholarship for Women in the Backcountry Promotion Entities are not responsible for injury or damage to participants’ or to any other person’s computer related to or resulting from participating in this Promotion or downloading materials from or use of any web site. If, for any reason, the Promotion is not capable of running as planned by reason of, but not limited to, infection by computer virus, worms, bugs, tampering, unauthorized intervention, fraud, technical failures, or any other causes which Sponsor deems, in its sole opinion, could corrupt or affect the administration, security, fairness, integrity or proper conduct of this Promotion, Sponsor reserves the right at its sole discretion to cancel, terminate, modify or suspend the Promotion or any part thereof and select the winner from entries received prior to the action or as otherwise may be deemed fair and equitable by Sponsor. Promotion Entities shall not be liable to winner or any other person for failure to execute the Promotion, or supply a Prize or any part thereof, by reason of any act of God, any action(s), regulation(s) order(s) or request(s) by any governmental or quasi-governmental entity (whether or not the action(s), regulation(s), order(s) or request(s) prove(s) to be invalid), equipment failure, terrorist acts, earthquake, war, fire, flood, explosion, unusually severe weather, hurricane, embargo, labor dispute or strike (whether legal or illegal), labor or material shortage, transportation interruption of any kind, work slow-down, civil disturbance, insurrection, riot, or any similar or dissimilar event beyond their reasonable control. In no event will Promotion Entities, their parents, affiliates, subsidiaries and related companies, their advertising or promotion agencies and/or all their respective officers, directors, employees, independent contractors, representatives and agents, be responsible or liable for any damages or losses of any kind, including direct, indirect, incidental, consequential or punitive damages arising out of participation in the Promotion, Promotion/Prize related activities, access to, and use of, any participating Internet site(s) or the downloading from and/or printing of material downloaded from said site(s). Without limiting the foregoing, the Prize(s) and everything on said site(s) are provided “AS IS” without warranty of any kind, either express or implied, including but not limited to the implied warranties of merchantability, fitness for a particular purpose, and non-infringement. Some jurisdictions may not allow the limitations or exclusion of liability for incidental or consequential damages or exclusion of implied warranties. THIS PROMOTION IS GOVERNED BY THE LAWS OF THE STATE OF UTAH WITHOUT RESPECT TO CONFLICT OF LAW DOCTRINES. As a condition of participating in this Promotion, participant agrees that any and all disputes, claims and causes of action arising out of or connected with this Promotion or the prizes awarded shall be governed by the laws of the State of Utah, without giving effect to any choice of law or conflict of law rules, and that any and all disputes that cannot be resolved between the parties and causes of action arising out of or connected with this Promotion shall be resolved individually, without resort to any form of class action, exclusively before a court in Utah having jurisdiction. Further, in such dispute, under no circumstances will participant be permitted to obtain awards for and hereby waives all rights to claim punitive, incidental or consequential damages, including attorneys’ fees, other than participant’s actual out of pocket expenses (i.e. costs associated with entering this Promotion), and participant further waives all rights to have damages multiplied or increased.