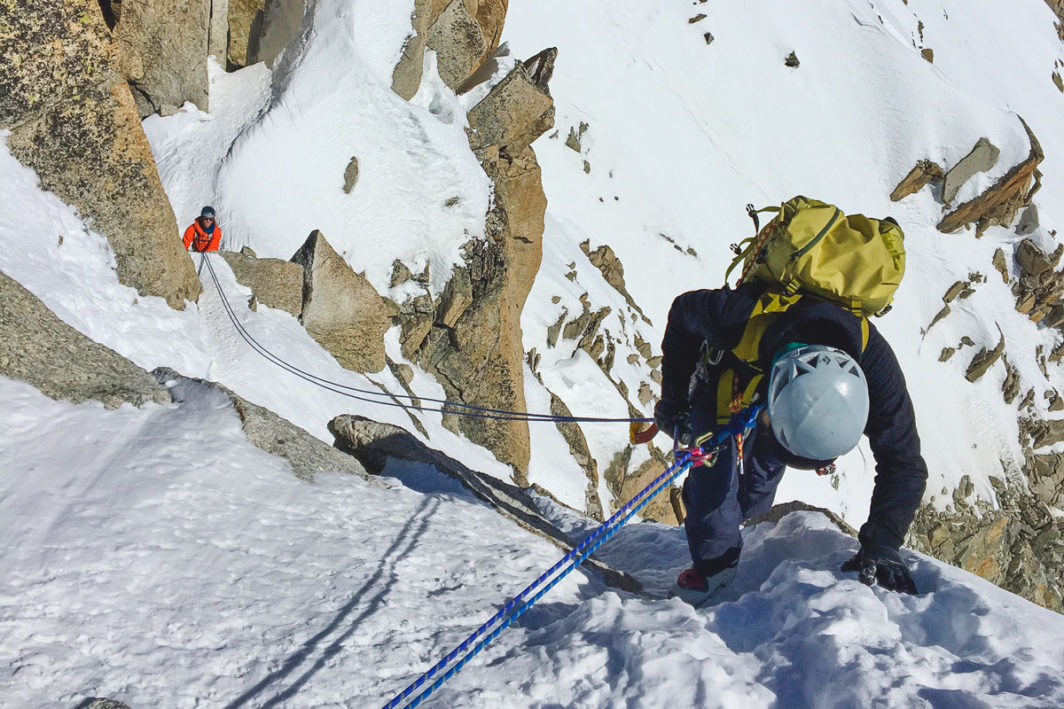 In the past month spent mountaineering in Chamonix, I have watched skiers tumble off cliffs, tomahawk out of icy couloirs, and whip into crevasses. I’ve been told that if I decided to rappel over a group that they would “cut me”, and I’ve been tangled up with impatient guides trying do the same on alpine climbing pitches and glaciers. I’ve been shouldered out of the way on a ridge traverse. And one time there was even a techno rave getting started at the top of our climb (the legendary Chamonix Unlimited Festival). 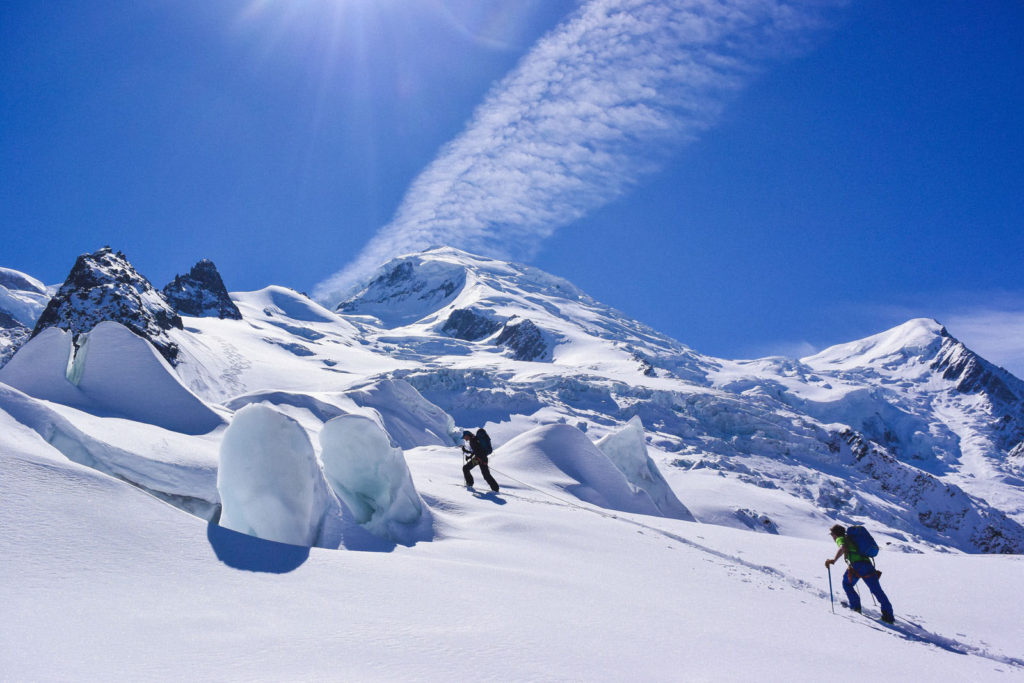 Working our way up Mont Blanc, across the Bossons Glacier
to the Grands Mulets Hut.

I’ve watched numerous high risk helicopter rescues go down for both friends and strangers, making me worried about the outcomes, all while trying not to think about and it to stay focused on my own day. There’s no doubt a little chaos can make it tough on confidence and keeping your own program together.

Skiing here in North America is a bit different. With virtually no tram access to my usual ski mountaineering destinations in places like the Tetons, Mt. Rainier, or anywhere in Montana climbers are forced to start from the valley bottoms. This initial 3 to 5,000’ climb can act as sort of a filter, both mentally and physically, just to get to the alpine. I for one know that I wouldn’t be cruising up to the Middle Teton for some steep skiing, or up the Muir snowfield and over to the Ingraham for some Glacier turns after a last minute decision over lunch on a patio. The tougher access will always mean fewer people, starting their days a lot earlier in the morning, and more committing days. In reality, catching the first tram at 8:30am up Grands Montets isn’t even early enough. Its easy to get a little too loose while mountaineering in Chamonix – the days can just feel so laid back. One minute you’re on the terrace at La Flambée drinking your Chardonnay, and maybe just 15 minutes later you’re on top of the Midi racking up to rappel into the Cosmiques Couloir. 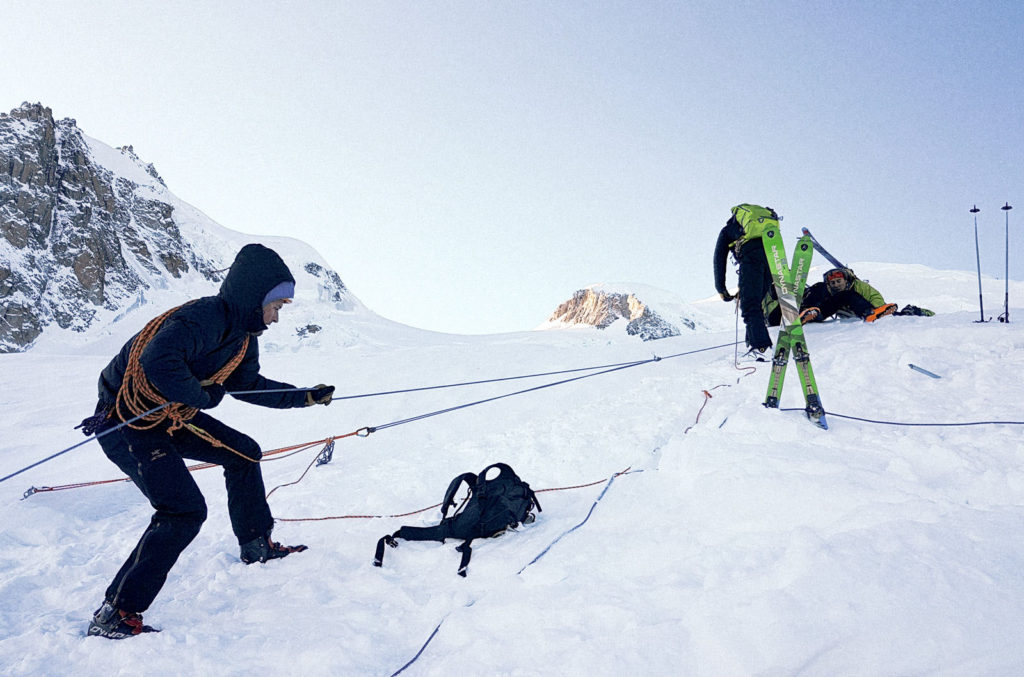 Setting up a 3:1 haul for a skier in a separate group.
The skier we rescued here had passed us
moments earlier. Photo Credit: Tom Coney.

This human factor is one that I really have to focus on, bringing it to the top of my priorities while over in the French Alps. There are hundreds, if not thousands, of people all around you getting after it, some of whom are the best in the world, while others should be with a guide but are not. Things like following tracks can really get you into trouble over there. That person who laid down the tracks could be way more comfortable with 50 plus degree skiing, or dry skiing, or could have longer ropes for a rappel that you didn’t know about. And no matter where you are skiing, everybody has a different level of risk tolerance. In fact mine changes from day to day. In a few instances when I decided to turn off of my objective due to avalanche hazard, poor conditions or the “too many humans hazard”, I watched people nonchalantly continue up the same route and get away with it just fine. This can really make you hem and haw while making the call.

At the same time, though, you don’t always “get away with it”. For example, the day we decided to ski only the lower half of the Col des Cristaux, a steep north facing run topping out at 3,600 meters in the back of the Argentiere Basin, we changed our plans. My partner, Oona, and I had a conversation deciding to not top out and get ourselves over to the side of the couloir in an effort to stay in the sun softened snow and avoid the eighteen skiers above us. We transitioned from climbing to skiing on a saddle in the sun and watched as people made nervous hop turns between side-slipping down the 50 degree firm snow. One skier who was a little too back seat slipped out and fell about 500 meters over exposed rocks jumping a bergschrund and eventually landing on the Argentiere Glacier. Miraculously she was OK.

In spite of the crowds, the chaos, and all the activity going on around you, mountaineering in Chamonix remains one of my favorites. It’s a great place to hone in my ski mountaineering skill-set. The community is top notch, people are open with sharing information on conditions, routes, and ideas. I was able to learn some slick tricks to improve my systems and watch some of the most dialed athletes around. I’ve made mistakes too – lots of them – and probably have gotten away with things I shouldn’t have. I’ve followed tracks into the wrong couloir, been lost on a glacier without GPS, missed the train out of the Vallee Blanche, had a ski pop off mid-turn because I didn’t clean my toe piece, realized my transceiver was dead during a beacon check, and even dropped my coiled 30 meter rope into a bergschrund. But this is what makes the sport of ski mountaineering so awesome: always learning, always checking your buddies, and most of all, always keeping it tight. 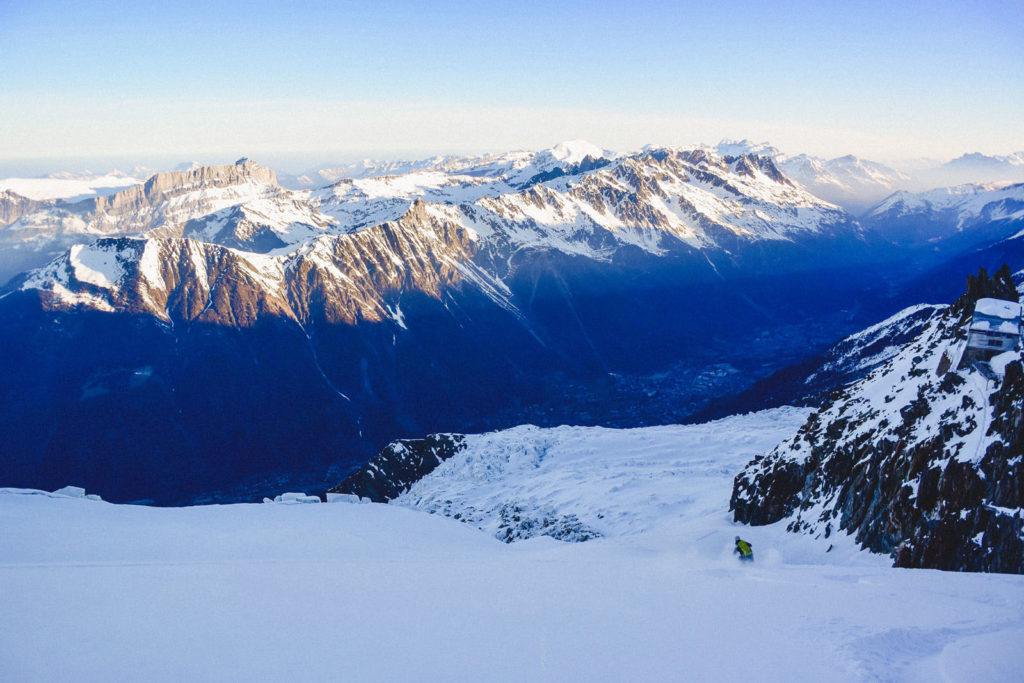 First Light over the the valley while mountaineering in Chamonix. 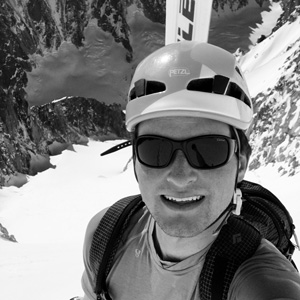 Blake travels around the Rockies and beyond as a full time backcountry skier. He is currently based out of Jackson, WY under the shadow of the Tetons. Although he can be found making his annual trip to the French Alps for a healthy dose of steep skiing and baguettes, Blake still thoroughly enjoys the more remote and less traveled corners of the mountains here at home. When on the road Blake finds inspiration in getting to know the many mountain ranges and the people who call these places home. Lately Blake has taken to the air as a part time speed flying and paragliding pilot, so when not on the slopes look for the Voiles in the sky.