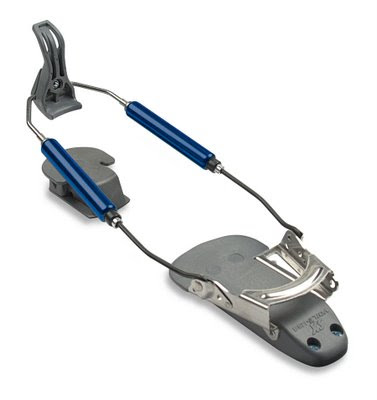 Had a chance to check out a long desired improvement to Voile bindings yesterday. To be more specific, a more active, turbo-charged version of Voile’s popular Switchback binding. Making the binding more active could be done by 1) moving the pivot point back further, and/or 2) increasing the spring rate of the cartridges used.

Voile opted to test a SX binding with the pivot moved back 3/8″. I’ve been testing telemark bindings since 1993, and have recently been involved in comparing what’s new for next season, in particular 22 Design’s free pivoting HammerHead, a.k.a. Axl, and Rottefella’s NTN binding with their various spring cartridges. Against these, and other more active bindings Voile’s offerings seem underpowered. That would only be at a first glance, for the reality is, while some telemarkers may desire more power from their binding, most of us are quite content with what we have. Voile’s bindings fall in the contented category, but having a bit more power wouldn’t hurt either.

This beta version of a turbo charged SX skied beautifully. It had noticeably more power, but not so much that I felt it might compromise sensitivity in soft snow. Part of that is due to the side routing of the cables which seems to consistently deliver a very smooth engagement. Some might call it slow, and indeed it is slower to turn on the power compared to tele bindings with underfoot cable routing, but that isn’t always a good thing. It is also a subtle difference that takes time to recognize.

Bottom line: This turbo SX binding skis great. On the HammerHead scale, I’d say (without a side by side comparison) the turbo SX is about HH#3.25. The normal SX/Switchback is more like HH#2.8. Can’t wait for Voile to adopt it for the Switchback. If you thought it was too much power, it would be easy enough to simply back off on the pre-tension a bit so that engagement was a bit slower, but overall power remained higher.