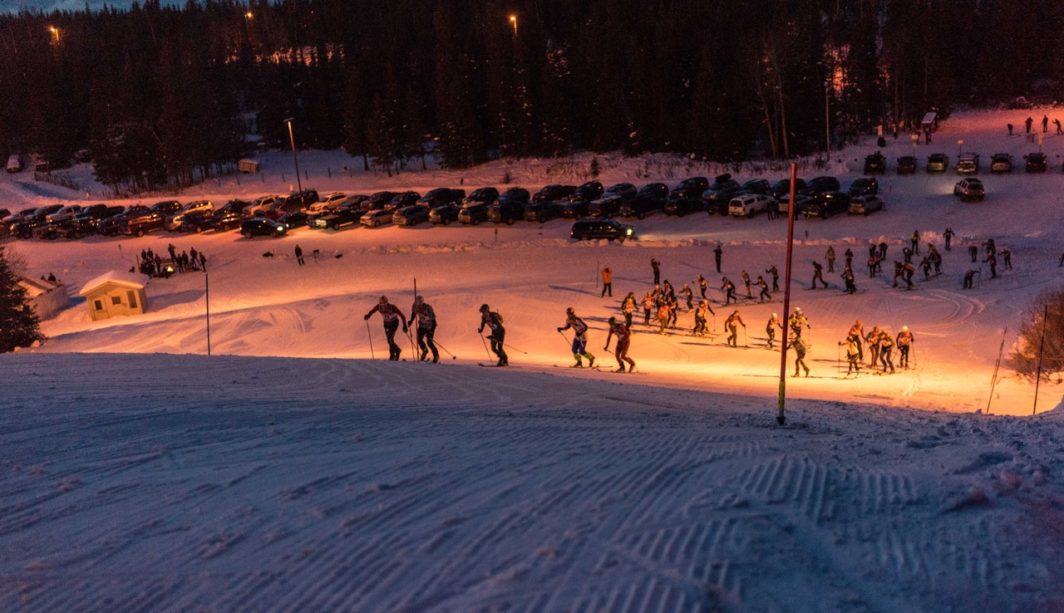 Before we dive into this Beginner’s Guide to Skimo Racing, let’s revisit my first-ever randonée race. I’ll never forget the experience: I was on a loaner ski setup that weighed 22 pounds. The boots barely walked and the skis were heavy powder skis, complete with frame bindings. It was a lap-style sprint race where participants try to get as many laps in as they can in an hour. I’m pretty sure I came in dead last… by the time I crossed the finish line covered in sweat, my friends were already inside enjoying beer and pizza. But for some reason, I was hooked.

Over the years since that first race, I’ve learned the tricks of the trade of randonée racing, and am now an organizer for a series of local races in Anchorage. In the spirit of making skimo racing more accessible and welcoming to the average ski tourer, or the beginner skier, here are some tips I wish I’d known when I first started out! Hopefully this beginner’s guide to skimo racing will help you know what to expect when you hit your first race.

First, I’ll quickly break down a few styles of skimo/randonée races and what you can expect. From beer-league sprint races to ultra-style backcountry races, not all skimo/rando races are created equal. You might encounter a variety of formats in your local evening race series: Missoula’s weekly race series “Rando Radness” varies from laps-in-an-hour, to a fastest-to-the-top vertical challenge, to partner races, and more. These are shorter and more digestible races that are often very beginner-friendly.

Bigger weekend races often involve a course that wanders around a ski area, with a few uphill and downhill sections. Many of these races divide into a “long” and “short” course, or “pro” and “rec.” The courses can vary in vertical gain and distance, and some races even just have one short uphill sprint. This type of race will typically publish a course map for participants to study beforehand. Some races are more technical than others, so do look at maps and stats—more on this later. Lastly, ultra-style races like the famous Grand Traverse cover many miles of backcountry terrain and require a whole added level of research, skills, and abilities.

Check out these tips below to get yourself ready for a local event.

This is one of the biggest tricks to get you ahead in a skimo race! Most races will require multiple transitions, and being speedy (~30 seconds) can really give you an edge up. I bet a lot of newer racers will roll their eyes or gawk at the concept of 30-second transitions… but I bet you can accomplish this, even on your standard touring setup! Go practice in your backyard, and create a system. When I was racing on my standard AT skis this was my order to switch from hike to ski:

Now that I race on my WSP’s, my method is:

Transitioning from ski to walk should be also be practiced so you don’t forget a step and, for example, start walking while your boots are still in ski mode… or forget to flip a riser and start walking just to end up locking your heel down. Yeah, I speak from experience 😉. Skis DO come off the feet for this transition!

Whatever your order of operations is: do it the same every time. Make your transitions expedient and be able to do them on autopilot. It will make up a lot of time in your race, but in the backcountry, fast transitions will also make your touring day more efficient, in turn allowing you to ski more pow!

2. Have a plan for your skins

Part of speedy transitions is knowing where you’ll put your skins. Pro racers stick them in internal pockets in their skin suits. But I’m going to assume that you, new skimo racer, are not wearing a skin suit. I typically wear a t-shirt and windbreaker when I race, and have had good luck folding my skins inside my windbreaker. I’ve seen other skiers wrap their skins around their neck or hold them in their hands for down laps in sprint races. Just don’t drop them!! If you are using race skins and doing a race with many transitions, you may want to consider carrying multiple pairs, in case of skin failure.

This annoying little phrase for dressing appropriately has never been more relevant. Sweat is the enemy, so you definitely don’t want to be wearing insulated layers or a hard shell for your skimo race. Especially for shorter, sprint-style races, try to dress as lightly as possible, as you are going to get worked on the way up. I typically wear thin gloves, lightweight hiking pants or leggings, a thin wool t-shirt, and my Houdini windbreaker. Sometimes the Houdini even comes off. In longer races, I still dress in light clothing, but carry an extra layer in my pack just in case things go awry.

4. Don’t be afraid to race on your standard touring gear

Yeah, race skis are super light. But not having specialized equipment shouldn’t hold you back from trying out a skimo race. I raced for years on my standard touring skis, which were 95 underfoot, and had just as much fun then as I do now on my race setup. It’s definitely possible to perform well on midweight gear, but more importantly, maximum fun can be had on a set-up you are familiar with, with no need to break the bank. Voile Hyper-series skis are a great choice to optimize weight savings, but still perform great for backcountry touring! While lightweight skis certainly benefit performance, most recreational racers are on standard AT gear, and you shouldn’t hold yourself back if your skis aren’t specifically designed for racing. Many races even delineate “lightweight/race” and “heavy metal” divisions. Remember, in my first-ever rando race, my setup weighed 22-lbs!

5. Get comfortable on the gear you will use in the race

IF you’ve inherited or purchased a pair of race skis, go out and use them—in a variety of conditions! If your race goes off-piste, or most of the course is not on groomers, you’ll want to have practiced with your race skis on variable snow. I’ve taken my WSP’s out on big days in the mountains far beyond what I would encounter in a sprint race. Because of that, I’m pretty comfortable getting down technical terrain or variable snow on them. Race skis and boots are tiny and can be pretty noodly, so you won’t want to test them for the first time when you’re amped on adrenaline.

Is your sprint race at night? If so, it might require a headlamp. Many bigger races go off-piste and require all participants to carry a shovel, beacon, and probe. Many races require helmets—but generally, they are encouraged if not required. Consider using a lightweight helmet that will help keep your head cool while going uphill. No matter what, be sure to check all published info for your race before showing up, so you can be sure to have the right gear on hand.

In my first few seasons of racing, I would start on flat riser and flip between mid- and tall- risers as needed throughout a race. This is a time suck. If you look at race bindings, they only have one riser level, and pro racers use them on all sorts of terrain. Embrace your flat or mid riser, and try to use it for the whole race. Even when the terrain varies from flat to steep, you might impress yourself with how efficient you can be without changing risers mid-lap!

8. Be prepared to bootpack

Most skimo race organizers will build a bootpack somewhere into the race. If it’s a short bootback in a sprint race, you can probably just shoulder your skis. If it’s a longer bootpack, you should have an expedient system for attaching your skis to your backpack. This is just another skill to practice along with your transitions. Race-style packs have a nifty system for attaching skis securely without ever removing the pack, but you can probably figure out a way to jerry-rig yours to a normal pack without much effort, too. I have seen some recreational racers just tuck their skis between their back and backpack. Figure out what system works for you, just know that the need for this skill might arise!

The first time I raced the Bridger Bowl Skin to Win, I cried in a couloir. I had signed up for the race last minute as moral support for a friend. At that point, I had performed well in local sprint races and the Whitefish Whiteout Rec course, but none of those courses involved technical down laps. I hadn’t realized when I signed up for the Bridger Bowl race that I’d be skiing technical terrain that I didn’t feel quite ready for. I wish I had been more mentally prepared for the challenging skiing I would encounter in the race.

If you aren’t quite ready to step out into technical terrain, be sure to check race maps carefully. Some maps go off-piste, or some require you to ski highly technical terrain in bounds. Some races even require technical climbing and mountaineering skills. Do your research so you can be sure that you’re prepared for the terrain you might encounter in your race. And start small! If you have a local beer league sprint league, that’s a great introduction. Once you are comfortable with those, consider signing up for a longer, more challenging race.

Sure, some people take skimo racing pretty seriously. But what encourages me the most about the sport is watching it grow. Races don’t have to be serious. My favorite part of lap-style beer league races is hooting and hollering for all my friends around me. And I’m known to talk friendly smack in the skin track. If you want to, wear a costume. If you’re not a costume person (I’m not), don’t! All I know is this: if I took racing super seriously my first season doing it, I would have quit right away. Keeping skimo racing fun is what has allowed me to grow in the sport, and that has taken me from the dead-last finisher to a competent racer over the years.

And remember: these races make for awesome learning opportunities.  Practicing transitions, kick turns, and technical skinning in a controlled environment will only add to your repertoire of skills as a backcountry skier! Slip-slidy kick turns practiced on an icy, blown out racecourse will help you nail those exposed kickturns on steep ridges in the backcountry. Nailing fast transitions confidently will come in handy when you’re on a windy, exposed summit. I learned a lot in my first few seasons of racing and developed skills that I now use in the backcountry every day. 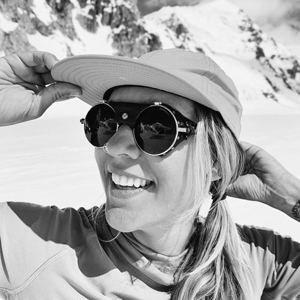 Born in New York and raised in Virginia, Emily Sullivan has spent the last decade seeking new experiences and terrain in the mountains of Montana and Alaska. After years of guiding summer trips in Denali National Park, she sought her current job with Alaska Wilderness League in Anchorage, Alaska. She is a dedicated 35mm film photographer, writer, and conservation advocate. An enthusiastic Randonée racer, she loves big, human-powered days in the backcountry and lives for traversing remote landscapes. Her favorite ski lines have been in Glacier National Park, Denali National Park, and Chugach State Park. Emily's current ski objectives include ski mountaineering and traverses in the Alaska Range, Wrangell Mountains, and Arctic Refuge.

Emily speaks and writes about protecting wild spaces, acting on climate change, and the correlation between time spent outdoors and mental health. She sits on the board of the Alaska Avalanche School, volunteers with the National Park Service in Denali National Park, and serves as an Ambassador for The Cairn Project. Emily currently lives, works, and plays on ancestral Dena’ina lands.